This page presents archived content from “Communicating Ciencia: Adapting to the Changing Faces and Voices of Mass Media” prepared for ScienceWriters2016 in San Antonio, Texas.

Aleszu Bajak is a senior writer at Undark, a magazine exploring the intersection of science and society based at the Knight Science Journalism Program at MIT. Aleszu himself was a MIT Knight Science Journalism Fellow in 2013, where he examined the interface between journalists, designers and developers. He also teaches journalism at Northeastern University and Brandeis University.

Aleszu is also the founder and editor of Storybench.org, an under-the-hood guide to digital storytelling, and is the creator of LatinAmericanScience.org, a resource for science news and opinion out of Latin America. In 2010, he launched «Ciencia Cierta», a Spanish language blog for the public radio show Science Friday.

Aleszu has reported across the Americas and been published in The Washington Post, The Boston Globe Magazine, Esquire, Nature, Science, New Scientist, Beer Advocate, and Guernica, among other outlets. The son of a Peruvian artist and an American foreign correspondent, Aleszu grew up in New Jersey, Germany, and Colombia and has lived in Chile, Peru, and Argentina.

Claudia P. Tibbs is a science educator and bilingual communicator at the Monterey Bay Aquarium in Monterey, California. Throughout her work and personal life, Claudia strives to create a culture that promotes sharing, collaboration and inclusivity in order to empower members of the global community to do great things. As a lifelong learner, Claudia seeks opportunities where she can continue to grow creatively as a communicator and educator. Claudia’s professional experiences and personal interests are rooted in marine science and conservation, storytelling and visual communications, as well as cats and whiskey.

At the Aquarium, Claudia works to empower students and teachers to take action on behalf of the ocean. Claudia has been featured on local and national English and Spanish-language programming such as the Disney Channel and ¡Despierta América! on Univision. Claudia has served as a contributing writer for the National Resource Defense Council’s Spanish language blog, “La Onda Verde” and launched the Monterey Bay Aquarium’s Spanish-language Facebook page, “Tu Monterey Bay Aquarium”, resulting in the first Association of Zoos & Aquariums (AZA) accredited institution to have a bilingual social media presence. Claudia advises the Aquarium on culturally and developmentally appropriate messaging to maintain Spanish-language consistency, resulting in more powerful and emotional experiences for guests to deepen their connection to the ocean and further the aquarium’s reach on and off-site.

Before joining the Monterey Bay Aquarium, Claudia held various community outreach and multicultural education positions along the central coast of California. Claudia received her B.S. in Earth Systems, Science and Policy with a concentration in Marine and Coastal Ecology from the California State University, Monterey Bay. Claudia attributes her passion for environmental advocacy, environmental justice issues and passion for education to her high school science teacher, Ms. Stevens from South Gate High School. 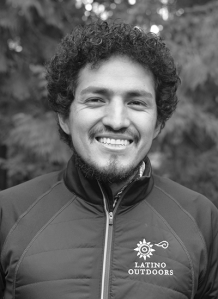 José G. González is an educator, illustrator, and conservationist, and he is the founder of Latino Outdoors, a national nonprofit organization working to connect Latino communities in the U.S. with a diversity of outdoor experiences.

José was named one of the “Grist 50: The 50 People You’ll Be Talking About in 2016” by Grist.org, and his commentary on diversity and environmental outreach has been featured by High Country News, Outside, Earth Island Journal, Latino USA, The Sacramento Bee, R.E.I., and the Sierra Club. José has been engaged in collaborations with the White House Council on Environmental Quality, U.S. Department of Interior, the National Park Service, and the California State Legislature. He has received the 2015 National Conservation Education Award from the National Wildlife Federation and the 2016 Rising Leader Award from The Murie Center.

As an educator, José has broad experience spanning K-12, postsecondary, and informal settings. He received his M.S. in Natural Resources and Environment from the University of Michigan School of Natural Resources & Environment (SNRE), and completed his teaching credential coursework in Bilingual Multicultural Education at California State University, Sacramento. As a public school teacher, he has taught courses for at-risk youth, and at middle school and high school levels. As adjunct faculty at the National Hispanic University, he has taught courses on Science Methods and Math Methods at the Teacher Education Department. And as a Program Coordinator with the California Mini-Corps Program, he trained and led undergraduate students to provide instructional services to migrant students in California school districts and in outdoor education programs. José was born in Mexíco and emigrated to California as a child.

Robin Gose EdD is the Director of Education at The Thinkery in Austin, Texas (formerly the Austin Children’s Museum). Robin has been a STEM educator for 20 years, both in the classroom and in museums. She began her career at the Austin Nature and Science Center before moving to Los Angeles to oversee programs at the California Science Center. She then transitioned to teaching K-5 science at an independent school in Los Angeles. During this time, she earned her Doctorate in Educational Leadership at University of California, Los Angeles, where her academic research focused on English language learners’ experiences in science classrooms.

Robin’s passion is to make science fun for young learners to promote their social, cognitive, and emotional development. She values providing authentic learning experiences for children to explore the world around them, with an emphasis on making science accessible to children from diverse backgrounds.

As our nation’s cultural voices evolve, how do we as science writers adjust our craft to connect with today’s bicultural and bilingual audiences?

Using the U.S. Latino and Hispanic experience as a focusing lens, this guided discussion and interactive activity will explore the nuances and approaches journalists and PIOs can consider to better communicate science in the United States — no matter what our audience’s cultural context might be.

*The content and opinions of this site are solely those of session organizers, and are not managed nor verified by the National Association of Science Writers. Errors and issues should be reported to session organizers.

**Ads placed on this website are selected by Wordpress.com, and do not represent the opinion of the session organizers.